To partner with individuals of diverse abilities to lead healthy, fulfilling lives by providing a foundation of support.

You are here: Home - Strive to Monaco Guest Speakers

Strive to Monaco is honoured to announce Guest Speakers Michael Coss and Glen Orris will be appearing at the event.

Michael Coss is the author of The Courage to Come Back: Triumph over TBI – A Story of Hope (2011) and the inspiration behind the creation of the Michael Coss Brain Injury Foundation. The foundation was created to raise money for children in need of financial support to access brain injury treatment and the proceeds from the sale of Michael’s book go directly to help the kids. The book is a moving account of Michael’s journey facing the challenges of traumatic brain injury. 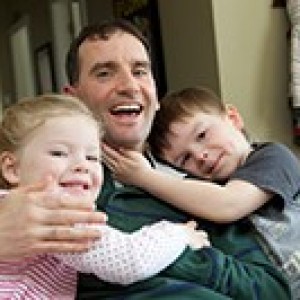 Michael is also the winner of the 2011 Courage to Come Back Award for Physical Rehabilitation (Coastal Health). Michael will tell you that his life was changed forever, and it’s been changed for the good. First though, he will usually tell you that he is the very proud father of twins, Nathan and Danielle who are now six years old.

Glen Orris was born and raised in Winnipeg until completing high school, after which he was recruited to play football for Simon Fraser University. He graduated in three years and was subsequently drafted into the CFL by Winnipeg. There, he played for three years while attending Law School at the University of Manitoba.

Glen returned to Vancouver and has been practicing law since 1973. Glen has been

primarily practicing as a Defence lawyer for those unfortunate enough to be investigated for or charged with a criminal offence. He was appointed Queen’s Counsel in 1987. Glen remains actively involved with the Lions, Bombers and SFU Alumni.

Glen will be speaking about the evolution of sport to prevent brain injury.

Ronnie Paterson, former Olympic Goalie, UBC graduate and local entrepreneur, will be introducing Michael Coss at the Strive to Monaco Gala. Ronnie played Varsity Hockey from 1977-1982 and was chosen as a member of Team Canada for the 1980 Olympics in Lake Placid. Following the Olympics, Ronnie went to work at Molson Coors Breweries where he was Director of Sales for 25 years. Since he left there ten years ago, he and his wife Kathy, have become well known and respected members of the hospitality industry in the lower Mainland. Ronnie and Kathy have been married for 27 years and currently reside in south Surrey where they have raised two terrific sons, Troy 23 and Tyler 18.

We are currently seeking Home Share providers throughout Greater Vancouver and the Fraser Valley! If you have a room or separate suite available in your home, please consider applying to be part of our Assisted Independent Living program.Funding contracts range from $1,500 to $4,500 net per month. Becoming a Home Share provider allows you to earn dependable income while working from home, make a meaningful impact in others' lives, and help people with various abilities. If you are interested in applying please send a Resume and Cover Letter to: samantha.ail@striveliving.ca. If you have any questions, please call 778.373.2064.Candidates must have at least one year of relevant experience (ex: care aide, social work, community support worker, or nursing). Wheelchair accessible homes and applicants with experience in mental health and/or addictions are in the highest demand. To review this position and its requirements, click here: careers-strive.ca.sincron.biz/jobs/details/53/assisted-independent-living-provider-family-care ... See MoreSee Less
View on Facebook
· Share

Our Children and Youth Services program is seeking foster care providers in Vancouver, North Vancouver, and West Vancouver. We are seeking homes for youth and providers with mental health experience. The child or youth is supported with their day-to-day needs, participates in family activities, and is integrated into the community. Please spread the word among your connections about this rewarding and meaningful opportunity. For more inquiries, please visit: striveliving.ca/foster-care/ ... See MoreSee Less
View on Facebook
· Share

Seeking skilled and experienced couples/families across the lower mainland to provide a warm and inclusive home environments for individuals with complex needs.Homes that include a separate suite for the individual to live in are preferred but not a requirement. Contracts range from $4,000 to $7,000 per month, dependent on the level of support the individual requires. Experience supporting individuals with challenging behaviors, mental health, addictions, developmental disability is an asset. One-to-one staff supports of up to 8 hours per day will be provided to give caregivers a period of respite.The Hybrid Supported Home Share program is unique and benefits both the Individuals being supported and Home Share providers in many ways. It’s a great opportunity to work from home and make a meaningful impact in others’ lives. If you are interested and have a separate suite available, please submit a resume and cover letter to andrea@striveliving.ca striveliving.ca/adults-services/hybrid-supported-home-share/ ... See MoreSee Less
View on Facebook
· Share

Site on the International Day of the World's Indigenous Peoples. Here you will find information and related links.
View on Facebook
· Share

In acknowledgement, Strive operates on the unceded, ancestral, and traditional lands of the Coast Salish peoples.